(DC Systems were also asked to fit within a small budget, which meant working only 1.5 days per week on the project; we were happy to do this.)

The new Drupal-based site replaced an older Oracle-based system which had proved to difficult to update or modify. Many new features were added, including Publications – a feed of all articles published by researchers at the CRUK CI.

After the site went live, the CRUK CI became a department of the University of Cambridge – we quickly modified the site design to accommodate the new branding. 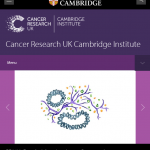 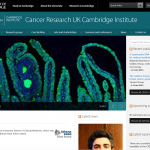 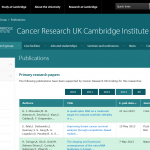 “We needed a high profile website delivered on time and on budget, with significant enhancements to the overall structure and much easier content creation and management. We were lucky and found David; the results are at http://www.cruk.cam.ac.uk – we can manage the content with a fraction of the effort. And yes, it was on time and on budget. I’ve rarely worked on a project which kept so well to scope and schedule with so little drama; respect.”  Dr. Peter Maccallum, Cancer Research UK / University of Cambridge