An unusual requirement was that the web app should not use a SQL database, for corporate reasons.

At the time there was nothing available on the open Web, so, after defining user personas and gathering requirements for each persona, DC Systems created a NoSQL web application which used XML files to store tasks and user records. These are updated in real time by the web application, for example when tasks were updated by researchers.

(N.B. The Biweekly Reports application is not available outside the Toshiba VPN, but see screenshots below.) 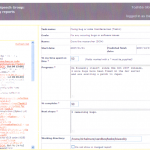 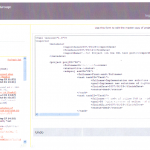 “David worked for me from June to November 2007. His work greatly helped streamline our business processes by implementing an online bespoke reporting and task tracking system. He delivered a Web 2.0 application, with a front-end written in Ajax & CSS, and its back-end in Perl & XML. This app tracked the status of all projects in the Speech Technology Group, and was used by the researchers in Cambridge, China and Japan. Managers could pull biweekly reports in a standard format for any project, which was the original main requirement for the application; previously, researchers had been spending valuable time hand-writing biweekly reports in HTML. However, the application also proved to be very useful to managers as a real-time dashboard, showing the % complete status of all projects; with full details on any project easily retrievable in the Ajax user interface.”